2011 I made two installations at the annual cultural manifesto “KulturNatta” in the city of Mölndal.

2011 I was asked to participate in the annual “kulturunatta” Cultural night in the town of Mölndal. I was given two places or spaces to work with and also to exhibit in.

The area for the whole cultural night is a old industrial area. There used to be a mill and different kind of factories,  and there is still a lively rapid going trough the area.

I was inspired by the the movie Fitzcarraldo by Werner Hertzhog.

“Would-be rubber baron Brian Sweeney Fitzgerald, an Irishman known as Fitzcarraldo, a lover of opera and a great fan of the internationally known Italian tenor Enrico Caruso. Dreams of building an opera house in Iquitos in the middle of Peru. To finance the project he determined to transport a steamship over a steep hill in order to access a rich rubber territory.”

My investigation and inspiration resulted in the works called “without tears” 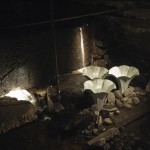 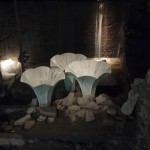 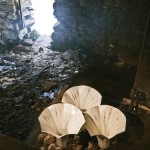 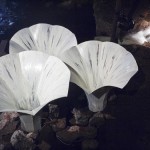 I took the form from the old Gramophone-speaker seen in the movie.

My daughter Natahlie sung the song Dido´s Lament from  Purcell´s opera Dido et Aneas. One could hear her voice trough the white loudspeakers down in the water area, in the the old factory where water run trough the wall. When I made the loudspeakers,

My second installation at the same time was further down the rapid called Götafors. I placed 12 oars along the side of the pond where the water runs slowly trough the old industrial area. Like our seek for the impossible mission..

I called it “without wind”. The last picture is showing the installation of the oars. 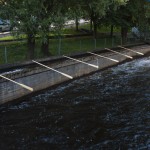 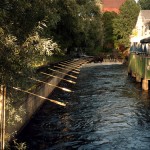 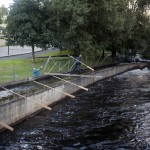