A sound based installation in the middle of nowhere.

Year 2003 I made a installation out in the wilderness in the municipality called Sotenäs here at the west coast of Sweden. I disassembled an old birdhouse found in the Island at the finnish west coast called “Cross base” an Island that I grew up on. I took the parts of the birdhouse to the swedish west coast like a migratory bird and I wrote a story about a fisherman’s wife, in the early 1950 ‘s, who wanted to have a tattoo of a cross on her chest because she wanted to dedicate her body to Christ. She and her husband lived in a small village near Sotenäs. 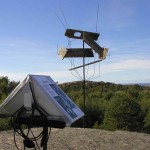 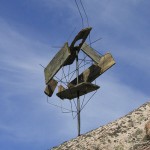 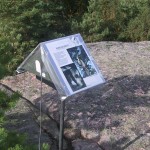 Sitting, beside my sculpture, on the top of the cliff you could look out at the never ending sea and listen to the story trough a small solar powered system with earphones.

Have listen… in swedish.